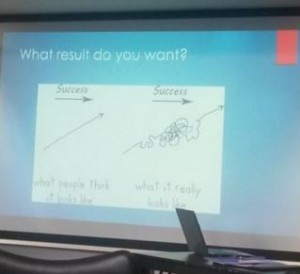 Recently, my lovely editor at CarinaUK gave a talk at a book event and tweeted this photo of one of her slides. The line on the left represents how people feel the road to success progresses. The one on the right represents what it actually looks like. And I would definitely say that is true in my experience.

I’ve had a long and rocky road to publication and penned my first novel in 2005. The very first agency I sent it out to was Darley Anderson. It came back with a swift, standard rejection letter (thoroughly deserved). To my disbelief, ten years later, I have just signed with this agency, a moment of success for me. But the line of progress in between those two dates has certainly been squiggly, with ups and downs and moments where I felt I was going around in circles.

Whilst completing a first novel is a huge achievement, it represents the beginning of a long and tough journey only those with a thick skin will complete. I wrote novel after novel that got rejected. Sometimes the line of my progression halted when I declared I’d give up my dream of becoming a published author. Of course, that was like declaring giving up food or water – the compulsion to write is in my bones and I never stopped for longer than a couple of days.

Then in 2011 my line progressed a little further. I sold my first short story to a women’s magazine. I went on to sell over 50 to the People’s Friend. In 2013 publisher Alfie Dog Fiction brought out a collection of my short stories in paperback and Kindle form, called Sweet Talk. That was super-exciting and a huge boost to my confidence and my little line edged a further forwards. I even bagged a great romance agent so, on the surface everything looked like it was going to plan.

However lots of squiggly bits were happening at the same time. I failed to sell more than a couple of stories to Woman’s Weekly, for example and the first novel my agent submitted didn’t find a publisher. Despair set in time and time again. In publishing, I find that highs are often followed by lows and then circles where nothing seems to change for a while and then you might hit another high. The one constant is that words, with hope, continue to be written. Smaller successes become very important such as a lovely comment from a reader or an encouraging line from a publisher who rejected but nevertheless enjoyed your work

And then in 2013 I landed a deal with CarinaUK, thanks to my then-agent and my debut book Doubting Abbey. It got shortlisted for an award. Then my bestselling summer 2015 book Game of Scones actually won an award. For a while the squiggles straightened themselves out which was thrilling for me.

But, of course, my line still isn’t as straight as in the left of that slide screenshot. Some books sell better than others. Bad reviews still come in. I have a long way to go. In my opinion, you are only as good as your next book, not your last. A writer can never, ever become complacent. I am working harder than ever now, with my first novella out on the 11th February, How to Get Hitched in Ten Days. This will be followed by my summer novel Breakfast at Poldark’s in July and after that, who knows…

I guess that means the squiggly bits are important. They prepare you for the lows and make a writer realize that above all, determination and perseverance rule the day. So if you are going through a down or circular bit at the moment, don’t worry. Everyone has been there, it just doesn’t look like it on the surface. Look at all the rock bands who disintegrate and then re-form years later. Or the politicians who fall out of favour but make a comeback. Life is messy – just like squiggles. The important thing is that you are trying, maybe sometimes failing, but picking yourself up, learning and then moving forwards again, even though that may not be in a perfectly straight line.
As Robert H Schuller said:
“Better to do something imperfectly than to do nothing flawlessly.”