On Saturday I had the pleasure of attending a get-together in Birmingham for authors and bloggers. It usually takes place once a month, either there or in London and is a fantastic opportunity to meet online friends from the writing world. And my enjoyment of this weekend had ABSOLUTELY NOTHING to do with the fact that I saw Peter Andre at Birmingham New Street station (but that’s another story…) 🙂

However it is not without some trepidation – excitement aside – that I board my train. Will I recognise everyone from their profile picture? Will their personality be as I expect, from the tweets and Facebook exchanges we have enjoyed? At its basest – will we get on? It is just like a blind date without the romance! 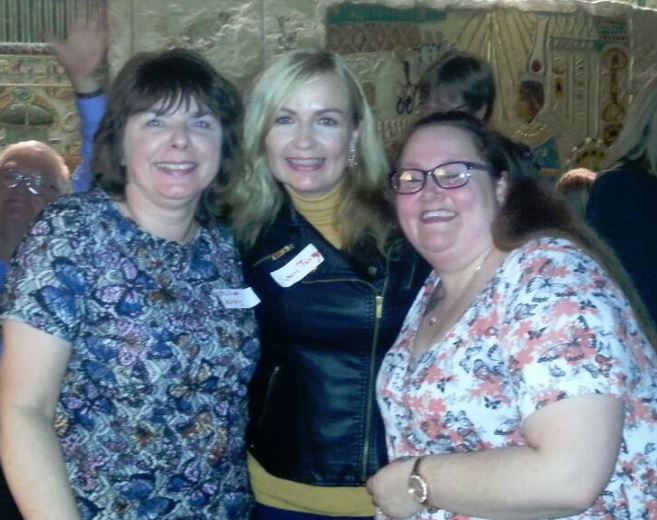 Here I am with lovely Phillipa Ashley on the left, author of Christmas at the Cornish Cafe. We had known each other for years, but never met. I am glad to say she was just as friendly, sincere and funny as I expected and a walking oracle when it comes to Poldark. On the right is Tishylou, a fabulous book blogger. I had met her before and – again – her true, bubbly personality shone through in person, just like it does on the screen.

This, however, is not always the case. I have met writers I considered lighthearted, who turned out to be quite serious. And vice versa. No bad thing, it just comes as a surprise. Whilst you may feel you ‘know’ someone well online, it takes a face-to-face encounter to seal the deal. And it makes me wonder what other writerly folks think of me. Hmm. Perhaps I shouldn’t mull that over too closely…!

There have been humorous moments – humorous in retrospect that is. Some profile thumbnails, particularly on Facebook, are not very clear and I am ashamed to say that more than once I have spent a while talking to one author and eventually realised I have confused them with someone else. Try backing out of that one. And it’s an instant guilt-trip when someone greets me as an old friend and it takes me a few moments – panicking! – to fathom out their face. Perhaps it’s just as well that most of the parties provide nametags. That would have prevented me from muddling up an agent and editor like I did last year at an awards event. In my defence they were both young and blonde and… Okay. No excuses really. Especially as one was heavily pregnant. However the editor was lovely when I realised my mistake, and said I could call her anything I wanted 🙂

So yes. Blind dates with writerly mates. No romance but plenty of laughs and discussion. And it is interesting to talk about more than our love of books. As a full-time novelist, I forget sometimes that other writerly peeps also hold-down jobs unrelated directly to the profession. I met one author who is an accountant and a blogger who works in a library and as a teaching assistant.

Plus the networking is great. Members of the writing community are very generous and I feel, after real-life meets, are even more likely to retweet and support each other. Also I’ve yet to meet up with someone who has appeared nothing at all like I expected and after a meeting I’d say the online relationship does take on a different  – a deeper – dimension. Nothing beats giving someone a real-life hug instead of relying on typing emoticons.