Almost all of my novels include an animal – either wild ones or pets. My mother was a huge animal lover and I can’t imagine creating a fictional world without them. As a child I had cats, rabbits, hamsters, fish and budgies and since I’ve had children can add stick insects to that list! Mum was an active supporter of the RSPCA and, I hope, would have loved my new novel The Summer Island Swap, that focuses on a tropical island conservation project. As a family we watched all of David Attenborough’s documentaries and we’d  marvel over the beautiful species he introduced to viewers.  As an adult I’ve rarely been without a pet – here is my current queen, Mitzie, a very affectionate long-haired tortoiseshell cat. 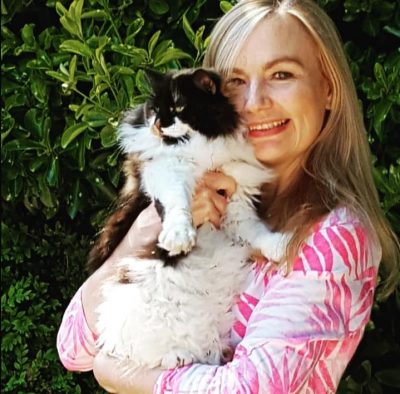 However, like everything else in your work, animals must have a function if they are to appear and here are some of the reasons I find them useful:

An animal is another tool in your writing work box to drive plot and demonstrate character. Take Toto in the Wizard of Oz. Trying to catch him is the reason Dorothy doesn’t hide in the cellar and gets swept away by the cyclone. He also tells the reader, early on, that Dorothy is a loyal, brave and loving person – her thoughts were with saving her dog, not her personal safety.

In The Summer Island Swap it is a monkey, Chatty, that takes centre stage in the fictional tropical world of Seagrass Island. Conservation leader Rick comes across as surly and abrupt yet shows a deep degree of tenderness with this small animal that he rescued. This gives the main character – and the reader – clues, from the off, that there is a softer story behind the offhand exterior of the male protagonist.

So the use of animals is an effective way of showing the grey areas of a character that, initially, might simply seem black or white. And they can also demonstrate a change in character – the smart, executive female protagonist of my summer story goes on an emotional journey and aspects of her are different by the final chapter – her rough and tumble friendship with Chatty the monkey has contributed towards that.

Animals can also make stories relatable and feel like home. Pets feature heavily in contemporary romances that write about modern people’s lives, where they walk dogs or talk to their cats. People own pets for all sorts of reasons – health, companionship, status – and including them offers additional ways of reflecting your readers’ lives on the pages.

Take my 2018 romance novel, One Summer In Rome. It features a blind Italian Protagonist, Dante, and his guide dog, Oro, (Italian for Gold). Their relationship is a functional one. Yet it’s also very much a partnership, built out of a  mutual respect and love. The moving and affectionate moments between characters and their furry friends add a heartwarming, relatable glow to stories for those readers who own a pet or have fond memories of a past one.

Also animals are, in general, hugely appealing, so don’t underestimate the the ah factor. As the creator of the web, Tim Berners-Lee, said, talking about how he imagined the internet would develop over time, “I never expected all these cats.” As a writer I have to admit procrastination due to watching animal rescue stories online, or videos of them performing tricks!

Of course animals feature predominantly in children’s literature and some adult fiction. I devoured Enid Blyton’s stories as a child and especially loved Brer Rabbit. When I got older favourites were the Stonor Eagles and Duncton Wood and the animal communities within these stories, with their leaders and followers, are effective at showing readers how a society functions. Plus a wide cast, with different species, subconsciously teaches children about the differences between people and, perhaps, how we should all get on, even though we might look nothing like each other. And they are also instrumental is helping children take the first tentative steps to understanding and accepting death. Author Tom Moorhouse has written an excellent piece about why animals are important in children’s fiction and you can read that here.

When my son came back from his rainforest volunteering trip I immediately wanted to write a story about animals that needed rescuing and the people who did that. From the feedback I’ve had so far, readers have fallen in love with monkey Chatty and I’m thrilled with that. Especially for contemporary romances, animal characters are an extra way of pulling on your readers’ heartstrings, in this way making them become even more invested in the story and driven to keep turning those pages.