It’s a great feeling, isn’t it? Writing The End after the last sentence of your masterpiece. All those hours you’ve spent with your characters, all the minutes during which you’ve managed to push away doubts or writer’s block.

But I hate to tell you – this isn’t The End. Really, it’s only the beginning. The first draft of a novel is like baking two sponges for a fancy cake. The real work starts after that, creating the filling and topping,  making sure it stands up straight, decorating the top with small details that are so essential for the bigger picture and can make all the difference.

And that’s what you have to do after writing the first draft. Pull the whole thing  – characters, plot, subplot, settings, prose… so that the overall experience of reading it is going to be amazing for the book buyer.

After I’ve written The End, patted myself on the back, celebrated in some way (coffee and cake usually) and taken a short break (some people swear by stepping away for longer, we’re all different) I then mentally rub my hands together and get stuck in again.

First off, I concentrate on three main things: 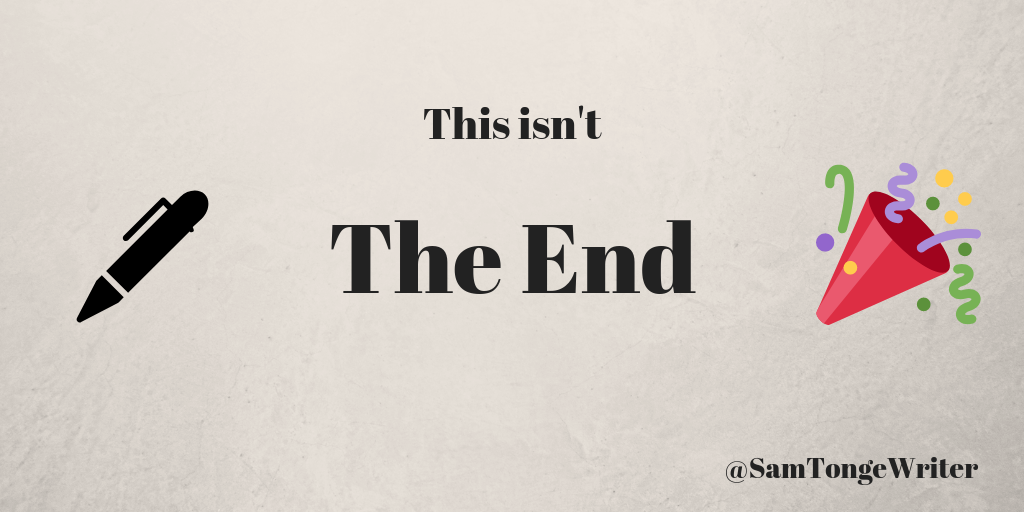 I ask myself if I have really started the story at the beginning of the action – at the crux of what sends the main character on a journey. I’ve had eleven books published but still, to this day, when I get feedback from my agent it’s usually along the lines of  “Do you think it would be better to start the story at your Chapter Two?” EVERY TIME I write a first chapter full of back story, setting up the plot, introducing details about the protagonists… But all of this can be slotted in later on. In that first chapter you want to grab the reader’s attention and give them a real idea of the main character’s motivation.

My 2018 romantic comedy, One Summer in Rome, is a good example of this. Mary quits her job and flees to Rome, hoping to leave her problems behind her. In my first draft the first chapter was all about showing how her life was in England, her former awful boss, the confrontation that led up to her quitting… In the final draft (the one published) the first chapter sees her already at the airport, setting off on her new adventure.

So when I begin a second draft I ask, is that first chapter really necessary or it is mostly a part of the story that can be woven in later on? Am I using it to get going with the main plot, or is it a comforting chapter for me as the author, to try to  make the reader understand my character as well as I do? Remember, in real life when you meet someone for the first time, you don’t tell them everything about yourself at that first meeting… little bits of your life come out, over time, as the friendship develops. And it’s the same with your novel – the reader doesn’t need to know the protagonist’s whole life history before the story really starts. And you want to grab their attention. So I try to cut more or less straight to the event that kicks off the main plot.

Secondly, I ask myself – are the stakes high enough? Because if they aren’t, how can I expect the reader to become invested in my main character and care enough to read on and find out what happens to them? In my last book, for example – Knowing You – Violet is unceremoniously dumped by her boyfriend which takes her on a journey of discovery. The outcome of this, in the first draft, wasn’t significant enough. Only one area of her life was in danger of imploding if things turned out badly. I needed to change this in order to get the reader really involved and rooting for Violet. So her love life was messed up – but what if, say, her career became affected as well?

I’m always surprised, at the end of a first draft, how much further I can push my character to the edge once I’ve asked this question. Sounds as if I’m cruel, doesn’t it, but I do love my protagonists! And it’s because of that I really want to turn the readers into their cheerleaders. By the end of a novel the main character will have changed in some way – this is the purpose of their story. So I really set them challenges in order to achieve this. Think of everything Elizabeth and Mr Darcy go through in Pride and Prejudice (helped by the minor characters and societal rules of the time) in order to finally express their love for each other.

And finally, is the world I’ve created detailed enough? Will the reader become totally immersed in it? To help with this I make sure I have described the book’s world using all five senses. Forgive Me Not is about a Emma, a recovering alcoholic who used to be homeless and returns home to make amends. The story swings between flashbacks to her grey life on the streets, and the present, with her family, on the joyous farm she grew up on. I made sure I graphically conveyed the contrasting sounds, smells and sights of these two settings.

For setting books abroad the internet can be a great tool. In 2014 I wrote From Paris with Love. I’d lived in Paris as a young woman but the memories were hazy so I found a webcam online that showed a moving panoramic view of the city. I printed off an underground map. I checked to see if tourist spots had changed since my last visit there. If you are setting your story somewhere real accuracy is important but not all authors can afford a research trip so you can get around this. Game of Scones was set in Greece but I set it in a fictional village.

And being a foodie, I use food to convey the character of my settings. Aromatic pizza in One Summer in Rome, sweet homemade strawberry jam on the farm in Forgive Me Not. Details to get the reader’s mouth watering.

There are many other things to look out for when rewriting a manuscript, but these are the major ones for me.

It isn’t The End. It’s just the beginning of creating something rather exciting.