A couple of weeks ago, during a phone call, I suffered a big disappointment regarding my career and it’s taken me a while to be able to write this post.

At first the usual thoughts went through my head:

I may as well stop writing.

Everyone else is having an easier time.

The world is against me.

Ridiculous really. I’m in a great place at the moment, with a fantastic agent and brilliant publisher, writing two genres that I absolutely love – and with Knowing You recently out, a book I’m very proud of, receiving wonderful reviews. But oh yes, I had a full-on pity party. Despite all the mindfulness and Buddhism I’ve learnt about over the last couple of years, I still have meltdowns now and again – I’m only human. The difference is I pull myself out of them quicker. NetFlix and chocolate help.

And another aid to recovery is to look back on previous disappointments and see how I’ve got over them and this acts as a huge pick-me-up.

In fact I’ve listed a few here – to show those of you currently in the doldrums that things do change and move forwards. The troughs don’t last forever, even thought they feel interminable at the time.

It took me six years to get my first agent. I’ve got a folder of 80 rejections. During those years I swore I’d give up writing, it wasn’t worth the tears. In fact my young kids offered to publish me when they grew up. I’m still holding them to that, even though they are now at uni, in case my career nosedives! But yes, tough times – but I just kept going, writing and sending my work out there and eventually got to sign on a dotted line. 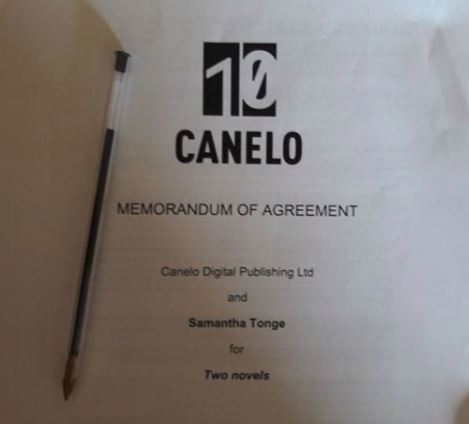 Up and down sales

My debut, Doubting Abbey, was a bestselling Christmas book December 2013. I even had interest from a Hollywood film producer! I thought that was it. I’d made it. All my books would continue with this success. But then the sequel From Paris with Love came out. The reviews were great and it did reach #600 in the AmazonUK charts, but it didn’t reach the dizzy heights of its predecessor. With a sharp shock I realised complacency was not going to be allowed to feature in my career.

In 2015 Game of Scones, got to #5 in the kindle chart, won the 2015 Love Stories Awards Best Romantic Ebook category and has sold 100,000 copies. The following two books didn’t sell as well. But then my summer 2016 book Breakfast Under a Cornish Sun got to #5 as well.

So for many authors there will be ups and downs along the way and after having 11 books published I realise that, and it helps me now if there are sales disappointments – who knows what is around the corner. I always say an author is only as good as their next book and this excites me and pushes me forwards. And I imagine that is the same excitement felt by agents and publishers when going through their submission pile. There are always endless possibilities. Who knows what your writing brain will come up with next?

Lack of understanding of the industry from bystanders

And it isn’t their fault. I don’t know much about any other sort of career so why should I assume bystanders understand how mine works? Indeed, before I started writing I linked a successful author career with red carpets and mansions with swimming pools. However once you’re in the thick of it, you realise what a tough career it is and the photo below reveals how unglamorous the day to day can be! It can be frustrating when yet another person asks if your life is like J K Rowling’s (I had that just last week). Or they question whether an ebook is a “real” book, or they dismiss your success if you aren’t currently in every single bookstore in the land.

Over time I’ve learned to distance myself from this and accept that the general view of what it’s like to be an author isn’t likely to change – and I’ve been lucky, most people who know about my job have been nothing but supportive. I’ve also found that joining online author groups helps immensely as you quickly realise most writers, at whatever stage, whatever their deal, to one extent or another, are going through the same problems and one of those is facing this very issue. 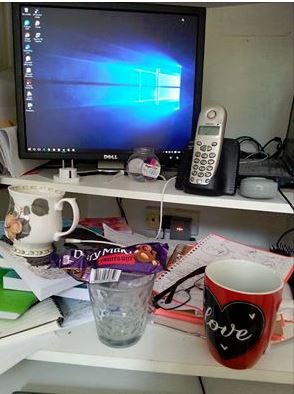 It’s a tough one, not comparing yourself to other authors, and it’s hard to remember that us writers are not pitted against each other (even though rankings might make it seem as if we are). Over the last couple of years I’ve had counselling for eating disorder issues that have raised their head again, after 30 years. My counsellor said it was ironic that I’d chosen a career where I am being rated the whole time – Amazon rankings, reviews – as anorexics/bulimics are continually rating themselves too. And yes, it is something I struggle with. But mindfulness and Buddhism remind me to focus on my own journey. That’s what Olympian coaches do. They tell their athletes the only person they are competing against is themselves and their last personal best.

So you aren’t alone. Stop being hard on yourself. Be a little kinder to self. Sounds naff, doesn’t it? But it’s so important. Look back at your positives – an encouraging rejection, a lovely review. You are all amazing just for putting your hearts on the line and getting your words out into the public arena.

It is hard. I feel as if I am soldiering on at the moment. It’s not a 9 – 5 job that you can leave at the office. It’s can be in your thoughts 24/7. And for that reason it can sometimes feel as if you’ve been in the industry for a life-time.

So you must also take a time-check. For example I’ve had 11 books published but that has happened within only 5 1/2 years. I’m still in the early stages of my career, from many points of view. I need to remember that and remind myself of how long it takes, in other professions, to become fully trained and reach your goals.

The ups are followed by downs and the downs are always followed by ups – this is true of any personal or professional life. So to keep sane, try not to attach to either as both will pass.

I also try to remind myself that many women of my mother’s generation didn’t have a chance to follow a career. The problems I am having would have been problems they’d have love to have had. So I remind myself to be grateful

Come and say hello to me on Twitter @SamTongeWriter if you’re having a challenging time.

We’re all in this together 🙂