When I found myself attending group therapy in an addiction centre, in 2016, I had no idea of the journey ahead of me to get sober. Three months there. A further three months in recovery services. Then I took a three month course to learn how to peer mentor young people in addiction. And all the while I was attending AA meetings. I did the 12 step recovery programme and I’m now exceptionally grateful to be 18 months sober. It’s a continuing work in progress. I won’t ever take my sobriety for granted.

Also, I won’t ever take for granted the life I have now. During those nine months in services I got to know people who were or had been homeless. One was a rough sleeper. She is in drug addiction and shared her story with me. A story that was one of the things that inspired my new book, Forgive Me Not.

She knew I was writing this novel and opened up about her life on the streets. How she used some of the money the public gave her for drugs – to keep her “topped up” to a level that made her existence bearable. The rest was collected to hopefully pay for a Bed & Breakfast each night. She needed £80 for that and didn’t always reach her target. In that case she’d sleep in the doorway of a shop that had CCTV. She felt safer that way.

I saw her recently for the first time in months, back in her usual spot. She gave me a hug. Said she was proud of my book. Asked how I was. Said I looked well. We exchanged the usual banter. I gave her some money. She thanked me profusely. As usual her cheerful, upbeat gratitude and attitude touched me deeply. 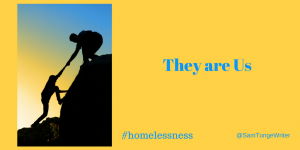 It’s easy to dehumanise the homeless – to see these people as them not us. But due to spending many hours in AA – due to all my research – I’ve learnt how any one of us could find ourselves in their situation. The reasons behind homelessness are very varied.

Care leavers, aged 18, with no family in their lives, are an especially vulnerable group. As are Army veterans with PTSD. Plus those in situations of domestic violence or those with other mental health issues. Another friend in treatment was forced to flee an abusive domestic set-up, leaving everything behind. She had no choice but to go into a hostel and start her life again from scratch.

Life-changing events make people vulnerable, if they suffer a trauma such a bereavement that sends them into a depression that means they can’t face work, they can’t pay bills, they don’t  care about themselves or responsibilities any more…

And then there’s addiction. One single incident can trigger a very rapid spiral into homelessness. Say an addict one day loses their job. They can’t pay the rent or mortgage. Finally their family’s had enough of the behaviours that now worsen.  As have friends…

I’m so grateful I hit my rock bottom before reaching the end of the alcoholism spectrum – before I did real damage to other people; before I found myself heading down that spiral. Wine o’clock could have had a far from glamorous ending.

It’s impossible to live in a city – I’m in Manchester – and not be aware of the homelessness tragedy. I stop to give change. Sometimes I have a quick chat. Not all rough sleepers are in addiction but due to my experience I guess it’s not difficult for me to see past the violent, aggressive or anti-social behaviours in the ones that are; to realise that person who might be using to the point of oblivion once had a life like mine with loved ones, mates, a purpose to get up each day – and a place to live. To realise that if they didn’t have all those things, they’ve probably come from a challenging background of mental health issues or neglect.

If you feel you want to improve a rough sleeper’s life in some small way but don’t want to give them money, here is a list of things that would be so useful. Pound shops provide them all cheaply.