Yesterday I saw Rocketman, the movie of singer and legend Elton John. Specifically it deals with his burgeoning artistic career, during his years of addiction. As a writer, recovering alcoholic and former bulimic (like Elton) I found it highly relatable.

His song, I’m Still Standing, makes complete sense to me now – on a personal level, but also with regards to my career.

Aspiring and published authors, from time to time, consider giving up.  I certainly have. It’s a roller coaster of a career (an overused phrase but true), what with the highs and lows that come with Amazon rankings, reviews, rejections, lost and gained contracts, and awards. And due to the rise of ebooks, more publishing avenues and great quality self-publishing, it is more competitive than ever.

Like many addicts, Elton’s behaviours were driven by a sense of not feeling loved – of not being good enough. And certainly the latter plagues me when it comes to my career. Therapy, as part of my treatment, made me realise I wasn’t just aiming to be the best author Sam Tonge could be – I was struggling to be THE BEST AUTHOR EVER. A goal I was never going to score.

It’s got me thinking – after everything that’s happened in my life over recent years, why am I still standing here, as an author? Because whilst it didn’t cause my personal problems, the pressures and expectations (admittedly some of them self-imposed) certainly didn’t help.

Apart from that innate drive in me to write and to want to write, I’ve managed to pinpoint three things that have helped me navigate the hard times.

Surrounding myself with the right people

This is CRUCIAL – speaking as an addict and an artist. It’s really important to surround yourself with people who believe in you…especially when you don’t. And if there is someone in your life who doesn’t fit this remit, you need to ask yourself why you are letting them in. Distance yourself from negativity. And people who make you feel as if you’re a failure – in any way. You don’t have anything to prove to ANYONE, except your conscience and yourself.

I currently belong to a great writing group online. Sure, we moan – that’s important, we all need to air disappointments and gain reassurance from realising we aren’t the only one going through difficult times. But the group is also full of positivity and camaraderie.

Over the years I’ve also accumulated wonderful writer, reader and blogger friends whose interest and encouragement keep  me going, probably without them even realising it.

An agent that suits you is also so important. Mine, Clare Wallace from the Darley Anderson Agency, has offered incredible support since I signed with her. She’s helped me keep perspective. Lets me know when I’m being overly negative (that’s important). She’s helped me keep an eye on the long-term so that any current difficulties don’t end up being catastrophised. And Clare is approachable. For me that’s the single most important quality an agent can have. If I’m worried about anything, however small, or on a downer about something that might appear to be minor or irrational to anyone else, it’s important for me to feel I can express that.

I’ve been fortunate with my agents and publishers – but if you have a publisher, agent, writing friend, anyone who is making you feel that you aren’t good enough, you need to have a long think about why they are in your life and whether that needs to change.

The photo below shows the first novel I wrote after getting sober.

I didn’t have it in me, at the time, to write another romcom. I’d had nine published but just couldn’t create more comedy after the gruelling process of getting treatment. Now and then I considered giving up my career altogether. However instead I mooted to my agent the idea of writing dark women’s fiction. She was super supportive and so I wrote Forgive Me Not – the story of a recovering alcoholic who goes home to make amends.

And now, a couple of years on, and most unexpectedly, I’ve found myself writing romcom again  and I’ve just signed a new contract, with a new publisher, Aria Fiction, and have a Christmas one coming out in October!

So sometimes, it might not be that you need to give up – simply changing direction might make you feel differently.

For example years ago, before my first agent and deal – I’d felt like giving up as my novels were being subbed and getting nowhere. But instead of giving up I started writing short stories for women’s magazines. I sold nearly 100 in the end and this massively boosted my confidence and helped me, I’m sure, finally get that novel publishing deal. 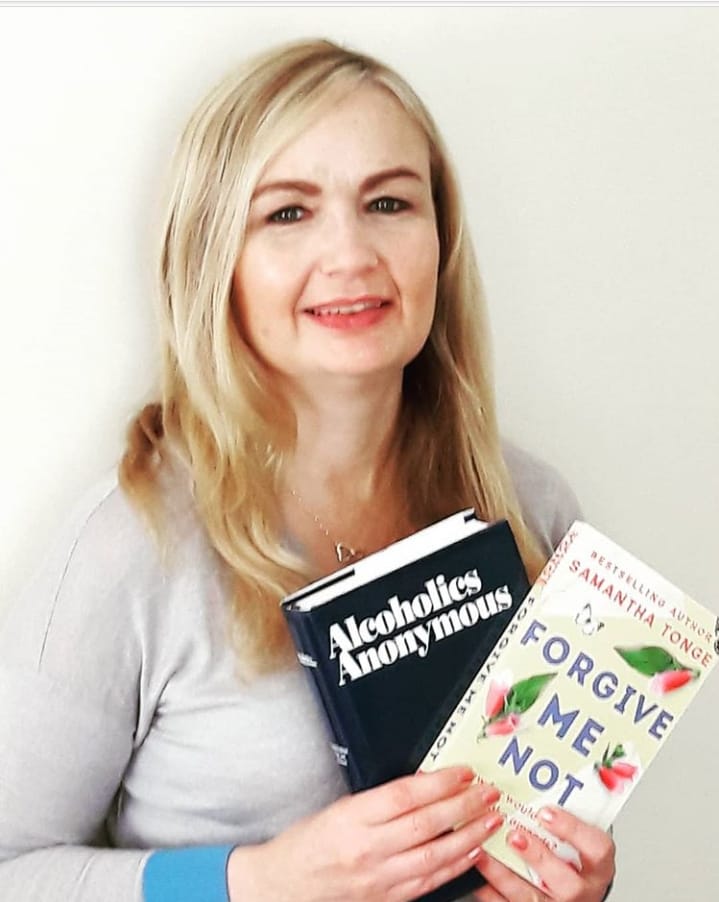 Being true to yourself – sounds naff, doesn’t it? But it’s a major part of recovery and, in my opinion, a crucial tool for coping with difficult times during a writing career. When my problems were at their worst, in 2016, they were also secret. I put on a front. I doubt many people looked at me, the author, and thought I had alcohol issues and eating problems. In fact, I know that’s the case due to the surprise people have expressed since I’ve been open.

I was bright and breezy. And it became a huge strain. I felt as if I had this persona to live up to. As if I were leading a double life. And that’s when life started to feel impossible.  I am a bright and breezy person but it’s not the whole me and it’s felt like a massive relief, since getting treatment, to share more sides of my personality and not just one.

So, for me, it’s been very important to put my heart and myself into my brand. I blog about mental health now. I tweet about sobriety and eating issues. And still all the other things like the baking I love and movies – but the picture is fuller now. And if I’m having a bad day, Twitter might know about it! And that’s fine. It’s real. Not having to put on a front helps when times get tough.

So if you are thinking about your brand my advice would be (and it sounds obvious) make it ABOUT YOU. Don’t tweet motivational quotes, for example, (I love them!) or pictures of cake if they aren’t really your thing and you just think doing so will get you followers – tweet about your own passions instead. And having a tough day? There are plenty of suitable gifs around to express that and no doubt many people will relate!

This way you won’t feel you have anything “to live up to”.

Having said all of this…

Don’t automatically dismiss your desire to give up

Yes, I am still standing, when it comes to being an author. But, perhaps, one day, that won’t be the right thing to do. Giving up your career or aspirations doesn’t mean you’re a failure. Failing would have been not to try in the first place. Yes, I’d love a movie deal for one of my books. I don’t imagine that will ever happen! But at least I’ve tried.

I still have the odd day when I want to give up. Sometimes the social media work seems overwhelming. It’s hard not to compare yourself to other authors and wonder why Hollywood hasn’t come knocking. A bad review can make you question your talent. My eating disorder issues still rear they head, especially when I take an author photo. Being “out there” as an author can be challenging from that point of view.

Yet there are so many aspects of my career I absolutely love. The writing itself. The fact I feel as if it’s what I was born to do and I’m fulfilling my destiny. And I enjoy meeting so many amazing readers and bloggers on social media. People telling my my stories have, in some small way, had an impact on their lives. I love the generosity and humour of fellow writers. I feel enormous pride about the books I’ve had published. I have a sense of achievement.

But life is not just about one career – there are other ones out there to bring in money and a sense of personal satisfaction.  Life is also about people. Travel. Hobbies.

Giving up doesn’t mean something has been lost. It just means you’ve gained experience, learnt about yourself and now, perhaps, it’s time to try something new.

You are still you. At the core. The person close ones love. That’s what matters.

Regardless of whether your manuscripts stay under the bed, or you are the next JK Rowling, you are still good enough.