A few weeks ago I wrote the first draft of Book 12 very quickly – 80,000 words in one month. This meant it came straight from the heart and I was able to write it with a clear view of the characters and plot, without long breaks from the project meaning continuity became hard work. There are casualties from speed-writing in this way – I’ve just completed the first read-through and had to spend a lot of time developing the minor characters, for example. But however long it takes you to get the initial version down, there is always more work to be done

When I first started out writing I didn’t really understand what a rewrite was all about. I just thought it was for refining the words – felt I’d worked hard on my first draft and that was enough; all that remained was to check it flowed pleasantly. And to be totally honest I think part of it was laziness. It can be gruelling writing a novel – certainly when you are just starting out and aren’t used to the process – and the thought that I needed to look at the whole manuscript once more felt overwhelming.

This is probably why it took me several unpublished manuscripts to bag an agent! And to appreciate that the rewrite was a valuable opportunity to look at the project with fresh eyes – from a distance, at a less involved level, to really make sure that each component of the story (plotting, characterisation etc) was doing its job properly. And to not be scared of deconstructing the story. You have to be brave to make your novel the very best it can be.

So for anyone else who sometimes finds it difficult to know what the next step is, after finishing a first draft, the following – in my experience – are common reasons to rewrite:

The settings aren’t vibrant enough. Not only do settings help the reader visualise where the characters are, they can also reflect mood or hint at plot.  So during the rewrite I focus on really involving all of the five senses. Say my protagonist visits a coffee shop – I’ll develop the smells and noises. I’m thinking coffee grinding, a till bleeping, customers deep in chat, cutlery on plates. Delicious aromas might accompany a feel-good scene or give welcome relief after a drama, along with a warm, visually cosy decor. The amount of work you need to do will largely depend on how detailed your first draft is but speaking for myself I often get so excited about the plot and dialogue and focus on those things, that my first draft settings suffer. 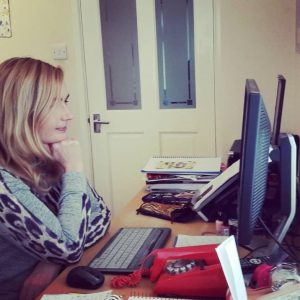 By the same token characters are not fully developed. I don’t think much about my protagonist before I start a new manuscript. I just dive in and keep continually going back to tweak him/her as I go. By around Chapter 6 I usually have an in-depth idea of what they are like and can then just continue  moving forwards. However, as I mentioned above, when I write first draft I don’t do this with the minor characters that are mostly created as I go along. Consequently during the first read-through I’ve just done I even found I had to completely change some of the supporting cast’s motivations. This  meant adding in a couple of chapters. Minor characters are there to assist the plot and show important dimensions of the protagonist – how/why they were as they were, how/why they’ve changed. So whilst minor in presence, they are major in importance and should be fully thought-through and rounded.

The pace hasn’t resulted in a gripping read. There are not enough hooks to keep the reader turning the page – or there are but they are in the wrong places. Lulls in action (important because the reader needs to catch their breath) have resulted in unnecessary scenes that don’t move the plot forwards or develop the main character – this is something I personally have to watch out for. I like nothing more than sitting my characters down, for a chat, over a cup of coffee to recover from recent drama but more often than not these scenes serve no real purpose. Every page of the book has to earn its place in some way.

The narrative needs refining. For the most part my first draft is thrown down onto the page – that’s the best way I can describe it. So the metaphors or similes aren’t necessary appropriate. The rhythm of the sentences might not flow easily. There’s repetition. I might use adverbs too liberally. I might show – or tell – too much (I’m a great believer in tell having its place!) For me the main point of writing is to exactly transfer my thoughts and emotions onto the page. Sometimes this takes time, so I compromise during the first draft. The rewrite will be when I might consult my thesaurus, and will really hone my craft and rethink words and sentences with care. Because if I get hung-up on doing this during the first-draft I can lose my mojo and come to a halt. And I find it’s such a joy and so satisfying during the rewrite to really take my time and polish or restructure what’s already on the page.

The dialogue needs working on. It might not sound natural. Or may not sound unique to each character speaking it. Perhaps it contains superfluous words.  I find I am always having to remove Yes and No’s. Certain dialogue tags may not be necessary (he said, she called, etc). And this time around I had to remove many nods and smiles that accompanied my characters’ speech.

Also double-check your facts. If you include anything written in a foreign language, is it correct? Have you thoroughly researched anything historical? What about locations? If, like me, you don’t do all of the necessary research before the first draft, then the rewrite process may not involve checking but finding out things for the first time.

Take a step back from your personal experience. As writers we inevitably put ourselves and aspects of our lives into our stories – emotions, themes, perhaps even characters or plot. This is ploughed into the first draft. But don’t make the mistake of thinking this means you don’t need to still do research. My latest release, Forgive Me Not was inspired by my own journey through addiction services but I still found I needed to interview case workers to make sure the detail of the novel was spot on. It’s also about Alzheimer’s and my family has suffered experience of this – but everyone’s experience is unique and I still researched how this disease might have affected other people differently. During the rewrite take a step back and consider if you have explored all aspects of your themes or if it’s one-sided by being simply based on what you’ve gone through yourself.

Some rewrites need to be more brutal – and this may be discovered after passing your manuscript on to a trusted beta reader, editor or agent. I virtually had to start Forgive Me Not again from scratch and I blogged about that here.

Whatever your reasons to rewrite accepting, in advance, that there will be some helps soften the blow when you come to that first read-through or receive initial feedback. First drafts are never oven-ready for publication and try to see this as a positive. Don’t be afraid of cutting or reconstructing. Now it’s your chance to really make that precious story sing!